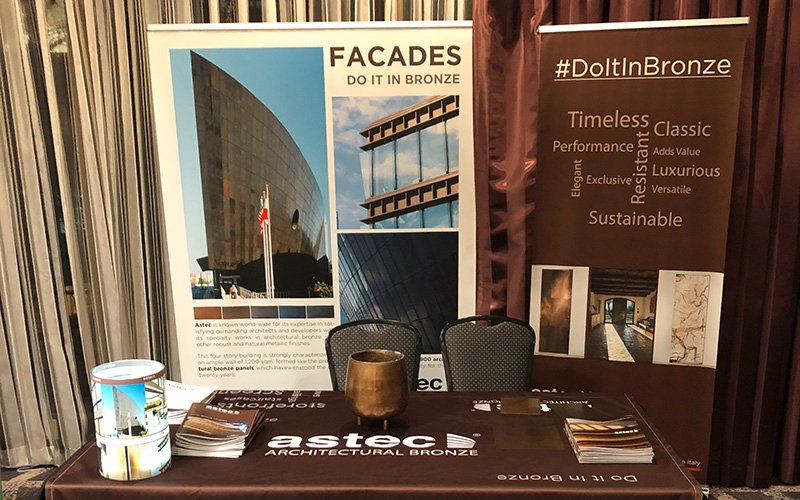 ASTEC BRONZE sponsored and took part in the Facades+ conference in Seattle on December 7, 2018. As part of the realization of resilient buildings and a sustainable built environment, ASTEC presented it’s extruded bronze curtain walls, copper alloy screens and other specialty facades in durable and noble metals. At the conference, American CEO, Patrick Rona, emphasized the importance of bronze and copper alloys in architecture, particularly as a sustainable and long-lasting building material that is made of approximately 80% recycled metals, with a low carbon footprint and without the use of galvanized treatments which are harmful to the environment.

At the Facades+ conference, ASTEC celebrated its 20th Anniversary of projects in the United States with a full-page ad in the most recent issue of The Architect’s Newspaper which in turn celebrated its own anniversary with a history of architecture in the 21st century through the headlines of The Architect’s Newspaper: ASTEC’s ad also emphasized history and anniversaries by celebrating the evocative and iconic bronze facade made by ASTEC for Mario Bellini’s American corporate headquarters project in 1998. In addition, the ad highlighted the 10th anniversary of the BKSK condominium project at 25 Bond Street and the 5th anniversary of the DDG condominium project at 345 West 14th Street in New York City, each of which were made with architectural bronze details by ASTEC.